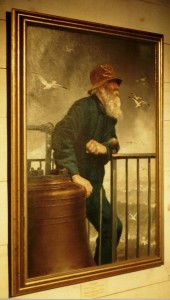 A rare fox print found on page 145 of the Gibson book depicts a gray bearded man standing in the light house surrounded by the roaring sea and soaring seagulls.  This print is “On The Alert” and is based on an oil painting produced by Fox in 1904.   The original image that Fox used to create this painting is found in the November 5, 1904 publication “Outlook” and seen on the second page of the article  “Signals of the Sea”.  The photograph was taken by the author of the article, Arthur Hewitt and is titled “On The Lookout”.   The author describes his visit to the Minot’s Ledge Lighthouse.

The painting measures 37.5“ X 25” and was originally purchased by the son of the subject. “R. Atkinson Fox” signature is found on the bottom left corner.  The subject of the oil (and photograph) is Roscoe Green Lopaus who was born in Tremont, Maine in 1845 and died in Chelsea, Massachusetts in 1912.  Lopaus was 2nd assistant keeper at Minot’s Ledge Lighthouse from 1896-1905. The painting was eventually donated to the Cohasset Historical Society and can be viewed in one of the exhibition rooms at the Caleb Lothrop house in Cohasset, Massachusetts.

It is not currently known when the print “On the Alert” was published.  If you own this print, please send us a photo so we can add it to the gallery.

One thought on “The story behind “On The Alert””