Warning: preg_replace(): The /e modifier is no longer supported, use preg_replace_callback instead in /home/customer/www/rafoxsociety.com/public_html/wp-content/plugins/wordpress-faq-manager/faq-manager.php on line 637

Can anyone join the R. A. Fox Society?

Answer:  Certainly.  Go to “Join Us Now” for information.

Yes please provide the title of the image along with the image. Use our handy submission form on the bottom of any page.

I have this print with a deco lady holding out her hands to the sky in a garden setting– is the artist R. A. Fox or Maxfield Parrish?

Question: I have this print of a art deco lady holding out her hands in a garden setting.  Is this by Parrish or Fox? 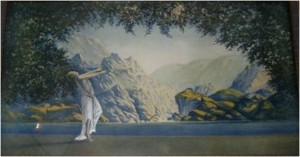 Answer:  The print is titled “Dawn” and was painted by  Robert Wood.  This print was issued as a nude,  with later prints “censored” by  painting a overlay of paint on the lady.  Others were then printed with a dress.

During the 1920s – the time period of the Golden Age of Illustration many artists did very  similar images because of the demand by the public.

I have a print with A. Fox written on the bottom. Is this by R. A. Fox? 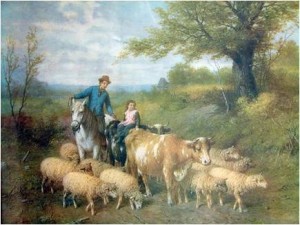 Question.  I have a print titled “A Quiet Brook” and is 16×19 in  size. There is no signature but on the bottom right corner is copyright 1908 by A. Fox Phila.  From my reading I think R. A. Fox was in Philadelphia at this time. It is a lovely countryside style print and wondered if this was an R. Atkinson Fox print? Any help would be greatly appreciated.?”

Answer:  The “A. Fox” found on a series of farm & rural scenes is the name of the publisher “A. Fox” and not the artist R. A. Fox.  There are about 5 or 6 such scenes around the 1907-10 time period that had this publisher’s name. No artist has been found for these series of prints.  It is thought by most Fox collectors Fox did not produce them.  Shown below are several examples of prints with the name of the publishing company A Fox. 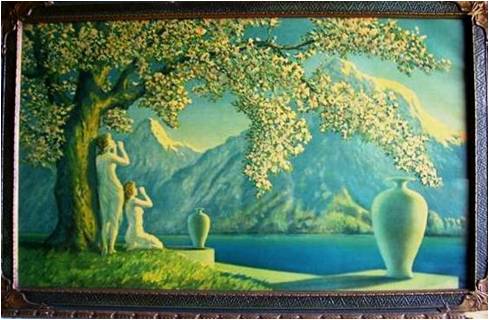 Lady Print titled Dream Castles – is this by R. A. Fox?

Question:   “Received the news letters in the mail today. I am very impressed and thank you for sending them.  Attached is a salesman sample calendar that I have had for many years. It is titled “Dream Castles” with the #3917. Calendar style would be late 20’s early 30’s? I doubt it is a Fox, but you probably can shed some light on it for me. Interested in who painted it and the date”.

Answer:  you are correct that it is not by Fox. Unfortunately we do not know the artist.   This is a good time to ask our members out there if you know the artist for this image.

Are there reproductions of Fox prints?

The answer is yes.  Reproductions of Fox prints (and many other artists) have steadily increased over the years.  Unfortunately a print may have been reproduced and placed inside an old frame, making it difficult to determine if it is indeed an old, original print.

Newer reproductions may also be identified by the shiny paper used, the over exaggerated color, and the poor clarity of the image.

Several very common Fox prints have been reproduced:  Romance Canyon, Old Fashioned Garden, Sunrise, June Morn, Daughter of the Incas, Daughter of the Setting Sun, Where Brooks Send Up a Cheerful Tune, and Giant Steps Falls.  With the advent of internet sales, additional Fox reproductions have been observed.  Although, some are truly counterfeits done on purpose, most are sold as reproductions.  Unfortunately, sooner or later, these reproductions tend to show up as “originals” in antique shops, malls and shows.  Many times the seller does not know they are selling a reproduction.

When purchasing a print, it is recommended you ask the seller for a money back guarantee if you determine at a later date that the print is a reprint or recent reproduction.