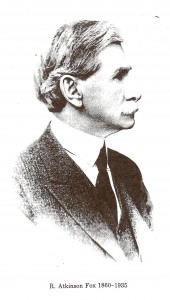 Robert Atkinson Fox was a popular and prolific commercial artist from the early 1900s until the early 1930s. He was commissioned by major calendar companies and art print publishers to illustrate calendars, posters, postcards, picture puzzles, and various advertising materials.

Although Fox painted whatever subjects publishers requested – including, in the 1920s, those typical of the Art Deco mode – his strength was naturalism. Although some of his work has beginning collectors confused with that of Maxfield Parrish, Fox was a painter of mainly landscapes, portraits, and rural subjects (especially cows).

Fox was a professional painter before he turned illustrator. Although little information has been uncovered about his early life, we know that he took up art at an early age. R.A. Fox was born in Toronto, Ontario, Canada, on December 11, 1860, the son of a Presbyterian minister. He left home in his early teens – apparently to further his study of art. For four years he studied art with John Wesley Bridgman, a portrait painter and member of the Ontario Society of Artists.

From about age seventeen to twenty-five, Fox earned his living as a portrait artist. Fox’s paintings were exhibited at both the Ontario Society of Artists and the Royal Canadian Academy of Arts. At some point in his twenties he studied art and traveled in Europe. Some speculate that the Barbizon School of Painters in Paris influenced him. Like them, Fox used soft and light colors to create a mood of gentle, natural beauty.

In the late 1880s, Fox moved to New York City. In the 1890s, his paintings were auctioned in New York and Boston, exhibited with the Art Club of Philadelphia, and the New York Academy.

Fox launched his career as a very diverse and talented illustrator in 1900 when colorful images began to be used to adorn advertising, especially on calendars.

At the turn of the century, Fox moved to Philadelphia, where he married a concert pianist. Nothing more is known about his first wife except that she died in 1901. Fox did not discuss any details of this period of his personal life with his later family and friends.

In 1903 Fox married Ann Marie Gaffney of Salem, Massachusetts. Anna was then twenty-five years of age and Fox was almost forty-three. Numerous births and frequent moves marked their early years. Between 1904 and 1920, Anna gave birth to eight children. As the Fox Family grew, so did his fortune as he expanded his clientele among calendar, printing, and picture-frame companies. During this time, the family lived in various communities in New Jersey, close to Philadelphia where most of the artist’s business was located. They finally settled on a farm in West Long Branch, New Jersey.

From West Long Branch, Fox made frequent trips to Chicago to the home of a major client, the John Baumgarth Company (which was subsequently sold to Brown & Bigelow). After Fox was involved in an automobile accident on one of his business trips, the family decided to move to Chicago to reduce his travel distance.

A tireless worker, Fox painted in his studio every day from memory, sketches, or photographs often completing a painting in a single day. Ironically, he had never been to the West at the time when he painted his Western landscapes.

During the Golden Age of Illustration, it is thought that Fox’s artwork was published more than any other artist.  Fox was a diversified artist who offered many varieties of subjects for the public to enjoy.  This extremely prolific artist offered something for everyone… images of pretty ladies, children, dogs, horses, cows, mountain and rural scenes, wild animals and much more.

To date, the R. Atkinson Fox Society has documented over 1,120 prints as the works of R.A. Fox.  Many additional oils have been identified which were not used by the publishing companies to produce prints.

The calendar company would often use fictitious names in order to make it appear that they had many artists working for them.  It is thought that Fox did not wish to make known to his employers he was working for their competition therefore signing with pseudonyms.  There have been 16 documented pseudonyms that were used in place of Fox’s name.  There is speculation among Fox collectors there may be an additional 40 pseudonyms for Fox.

Quite often when Fox was asked to paint a scene he would not always paint on canvas.  Because these paintings were not intended to last for many years he would often use wood, paper or sometimes paper glued to canvas.  When the publisher received the painting they would often mark up the oil with comments, e.g. move a house, animal or even a tree to a different place.  Fox would then change the image and return it to the publisher.

After several years of ill health, Fox died in 1935 of heart disease.

R. Atkinson Fox’s art have been popular among collectors for decades and show no sign of diminishing.  “Fox Hunters,” as collectors call themselves, hold an annual convention and publish a quarterly newsletter.